No, I’m not calling these cats something like morons. Far from that. They are the finest metal one can find.

Copulation of Cloven Hooves is the sophomore Slutvomit album that will bring happiness to truest headbangers.

That being said Copulation of Cloven Hooves is not a crazy salad, a free-jazz blend of styles… No. They capture the exact moment when these styles started to become separated and each one got its own one way. But it MUST be a point of fusion, when Slayer came to fore bringing Sodom, (old) Sepultura, Sarcófago, Voivod, Possessed, Slaughter (Canada) you name your poison!

Command for Triumph/Genocide Lust (an intro plus the song itself) strikes the chord of the true metal for truest headbangers. The vocals of course are very Bathory-esque, rabid, thrashy to the core, unremitting metal lust for the posers who dare to defy the old order, the ancien régime…

Build your weapons, because the song Endless Graves comes to the fringe of the old and good Death from Screaming Blood Gore. Seriously if you don’t like this one and find it very “simplistic” you should go back to the rule book of metal because yours is missing some pages…

Baphomet’s Call is like a strange mixture of old Slayer (Show no Mercy) and old Sepultura (from the Morbid Visions album), the beginning of everything, although I don’t thing it’s the best song of the album…

Evil Commands You is not understandable if you don’t take the dust off your old Sarcófago’s I.N.R.I. vinyl and listen to the title track. Copycat or an homage? I don’t care, for me it is just marvelous.

But the best song of the album is Acolyte of Death’s Destruction which is the most complex song of the album and by complex, I mean various phrases (hello kiddos, you wouldn’t understand) and over again evokes Chuck’s Death: the song Evil Dead, but over again with that Slayer feeling of satanic might and power. The vocals here are pure Mayhem from Deathcrush for sure. There is a fantastic solo by the mid to end of the song, very metal indeed.

Copulation of Cloven Hooves was not made by pure chance. It shows a well-prepared band to show its influences and to raze the city to the ground. I daresay that in one album they did what Darkthrone has been trying for a lifetime (with all due respect to Fenriz and Nocturno Culto).

Copulation of Cloven Hooves is going to be out on Invictus Productions on October 4th.

Since the inception of Bhleg, Ludvig Andersson and Simon Johansson, along their sophisticated sounds of wintery Scandinavian roots are prone to keep a Burzum-like atmosphere. I mean, they are not an imitation, they have their Swedish approach of their hyperborean origins, but some characteristics were there when they’d released the excellent Draumr ást in 2014 and the exhaustive (yet perfect) Solarmegin.

First song Vittra och dö (Wither and DIE!) is a 14-minute assertion of their notable work in one track with all kinds of atmospheric/ambient nuances but never following on MODERN black metal from their countrymen. It’s culturally laden but without being “Viking metal” or “folk metal”. This is PURE BLACK METAL cult. Always maintaining the tempo, the track is a trip to the immemorial traditions of the first indo-european inhabitants, primitive, but still beautiful.

In a segue style, comes Från eld till aska (From fire to ashes) which has a more impressive musical theme all along the way.

But the final track Skördetid (Harvest Time) is the one with an explicit Burzum influence, but don’t be fooled. It’s seems more like a homage than just a copycat thing, which sums things up. To be more simplistic, this is like Burzum with Bhleg. Yeah it sounds really stupid to say that but there’s no other way to say it.

The only flaw in Äril is that it only clocks in at 28 minutes. I’d listen like 3 hours, non-stop of this kind of material which is really made with heathen heart and true to the original Scandinavian black metal. Second to none!

Äril is going to be released on Nordvis Produktion on September 27th. 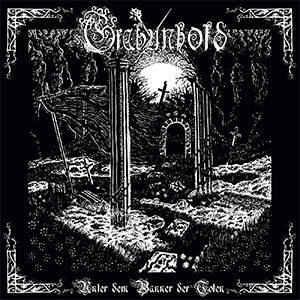 This is the sophomore release of the ultra-underground band Grabunhold.

First track (Gespenster) is an assertion of what true black metal must sound and it’s kind of melodic although maintaining a certain level of aggressivity. This is not what people call atmospheric and it reflects the old school way of doing the deal: direct and repetitive riffage with a theme, vocals from the void, but always maintaining an order (this is not a bedroom noisy bullshit anyway).

Second track called Hexentanz is very occult: it maintains the quality of the first track but it’s a quasi-instrumental as no words are said until the middle of the track and when it is done it is something very Burzumic (remember, no direct atmospheric influences), just to fade out and the songs continues its lament all the way to the end.

Von Gefallenen Helden und verges is a bona fide interlude with guitars, but nothing much special to say about this one.

Grabunholde packs the EP with quality European BM always championing quality: Iterations in riffs, a 4/4 approach but with a sound that is like an earworm which saves the headbanger day!

Unter dem Banner der Toten is an EP and it’s good to grasp the intentions of the band as the first one is not so different from this one. Now that the die is cast, let’s wait until the first full length to appear. 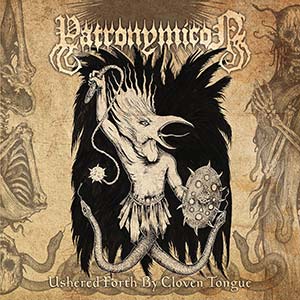 Patronymicon is a Swedish evil manifestation that came to life in 2009 in Sandviken and they have 3 albums so far including this upcoming Ushered Forth By Cloven Tongue.

Traditional Swedish Black Metal (in the vein of Marduk, Dark Funeral), they demonstrate (as the majority of the bands from that country) a dexterity between heaviness and some level of melody (this is NOT atmospheric Black Metal).

This is not really original stuff, but who cares? If you’re loyal, this is not an issue at the end of the day.

The Funeral Of A Passive God, the second track of the cd, presents a wall of noise with one million riffs made to destroy the listener, while the song ranges from the absolute blast beat to mid-tempo while the vocal is well marked in the mix.

XI Kings XI Curses is pure velocity and satanic hate. Riffs that are aimed to get the fan of Swedish black metal, this track lives up to expectations, extremely violent by the way, it deserves several spins. Bullseye!

Another great track is the penultimate A Star That Shineth Not with its dramatic feeling and over the top density.

All in all, as I said before, it’s not the most original made in Swedish lands and in black in total. Normally I’d say for one to hear the original stuff. But this opvs is made with too great dedication to the traditional stuff that I’m not going to be the grumpy guy who’ll tell you to hear something else. Grab your copy and binge in the uncompromising black metal.

Ushered Forth By Cloven Tongue is going to be out on September 27th on Osmose Productions.