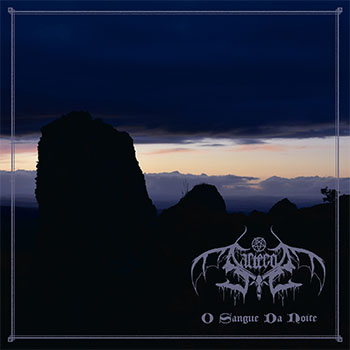 Sartegos is a band that hails from a region of Spain called Galicia and they sing in a language that resembles Portuguese very much.

Although they’re a relatively new band, they have quality works behind them including their first demo A Serpe do Escarnio released in 2010.

But while they’ve been so far a good band, O Sangue da Noite , their debut full length, shows an excellent one. Why? Because they did the impossible: an original blackened death metal sound.

Normally this terminology is a little bit confusing: One can be talking about Behemoth/Belphegor, or simply about the war/bestial metal of bands like Blasphemy, Sadomator, Morbosidad and so on. There is a chasm between the two “styles”. Sartegos is at the middle.

That is not to say that they are a mediocre band: NO! They concocted their own music using both death and black. They’re not an imitation, they’re not an act!

For instance, a song like Lajes em Tormento e Decadência shows a complex, fast and heavy form of satanic metal that is not progressive, indeed, I can´t label it. But there’s layers and changes of tempo in a myriad of riffs and passages.

While Solpor dos Mistérios follows suit, the song Arqueiro is the most complete of the album: exploding the speakers, it resounds some Poland bands like Hate but heavier. The main theme is an earworm without compromising the brutality of the opus.

But the best song for sure is As Devesas som dos Lobos that follows a theme while the song dramatically progresses in mid-tempo just to give space to brutality and chasmal bellows from hell. Simply perfect.

The last song is a Burzum-esque piece that serves as an outro and is called Águas Negras.

The complexity of this album will get the fans of heaviest black metal by the balls for it is a surprise. Yes, this is original to the bone. Ye,s this is difficult to assimilate at first. Yes, that’s the way I like it.

O Sangue da Noite  will be out on  I, Voidhanger Records on November 29th

After the passing of Baron Blood, Necromantia will be no more.

They are going to disband after a last release. 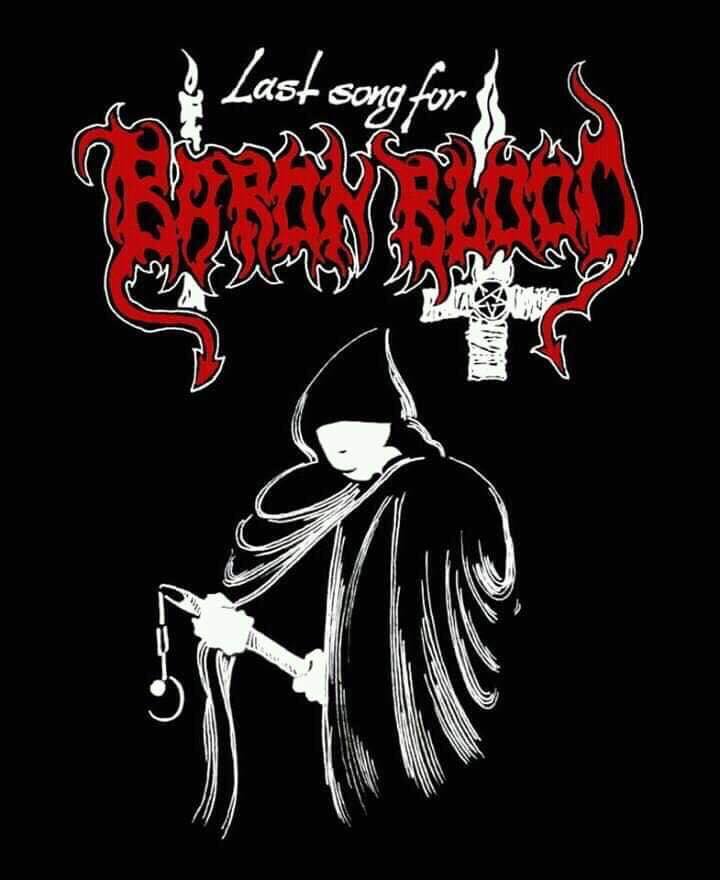 According to THE MAGUS (Magus Wampir) of the almighty Necromantia, after the sudden death of Baron Blood, Necromantia will be no more.

The intention is to release one final tribute in a form of an EP in 2020 (date unknown) as a way of homage to the late Baron Blood who contributed to all Necromantia releases.

It is fair enough since some people in some line-ups cannot and should not be substituted, and Baron Blood was one of these persons.

Baron Blood passed away last week for a heart attack (read the news here) prompting The Magus to take this sad but sage decision.

Apart of Necromantia, The Magus also is part of Thou Art Lord with Necromayhem (aka Sakis Tolis) from the famous Rotting Christ. So we hope to hear something from them in the near future as the band is active.

The Necromantia 8-string genius is said to be dead by heart attack.

Today, the sad news is that a genius behind the one of the most respected hordes from Greece is dead. Makis aka Baron Blood, 8-string bassist and keyboardist of Necromantia died today of an allegedly hard attack leaving a legacy of pure black metal alongside his bandmate and Necromantia‘s mastermind Magus Wampyr or simply The Magus.

This is a sad day for NECROMANTIA.
Baron Blood left this world. His soul now roams free to other wolds (SIC) and dimensions. His spirit will live forever in our hearts and his music will remind us what a great artist he was….ride free my friend…
The Magus

The original post is as it follows.  Check it out on the page: https://www.facebook.com/necromantiaband

Alongside his idiosyncratic way to play bass (listen to his personal mark in the classic Necromantia album Crossing The Fiery Path) Makis also was sound engineer for the Naer Mataron‘s album 2005 album Discipline Manifesto and Soulskinner‘s 2003 debut album Breeding the Grotesque. He also made stints in the very same album as a bass-player alongside Bill Zobolas and Gothmog (both from Thou Art Lord that has his Necromantia‘s bandmate The Magus and Sakis Tolis from renowned black metallers Rotting Christ.)

Before Soulskinner he played with the very same formation in the band Terra Tenebrae that changed name.

He played in all releases from the almighty Necromantia. Other personal information cannot be reached by Dark Souls United. 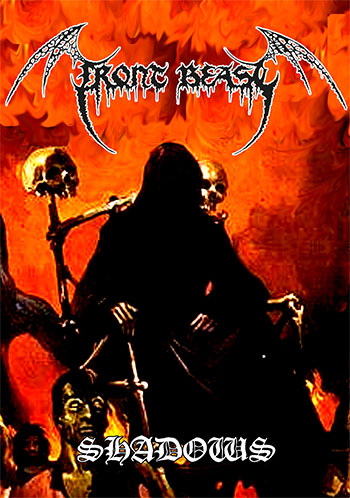 Front Beast is a long-running project of the Nocturnal’s axeman Avenger where he is the sole member. This one-man band (or project) released countless demos, splits and full-lengths along its prolific career.

That being said, Shadows is an EP released in cassette limited to 100 copies only!

The sound is a very simplistic black metal, yet a gem of the most underground pedigree.

Comprising of only 6 tracks clocking in at 20 minutes there is no really a highlight, but interestingly enough there is a song there is NOT Sepultura cover but carries the very same name which is Morbid Visions and the song remembers the vocals of Max Cavalera in the album… MORBID VISIONS. Of course, is not a fast-than-speed -of-light sound as all the songs here are mid-tempo.

For example, Circle Of Dancing Shadows which has a very PRIMITIVE production in a blackened heavy metal sound which is underground to the bone. Not for neophytes.

Wolfs Howl is very alike the aforementioned track which makes a kind of dichotomy: while the songs are ease to get in an almost punk MO, they are hard to distinguish between themselves.

It’s an interesting EP that keeps its value on a rarity-like release that is not going to become a classic but will become an item for collectors and fans in the future. This fact alone is the reason enough for you to run for your life and get a copy. Some releases have its intrinsic value not only in music, and old-schoolers know what I mean.

Shadows is out now on cassette via Hellprod.

I confess I was never an adept of the thrash revival and neither I like modern thrash metal bands in its majority. I prefer the old bands and a great deal of the thrash classics are great to me. Period.

In other words, if I have to listen to thrash, I’d go to the original material.

So how surprised I was when I listened to Feast Your Eyes by the Canadian demons of Warsenal. This is their sophomore full length. Their first album called Barn Burner is not something from outer space, but this one is a helluva album.

I mean, they are old school and original at the same time, so heck, this is bulls eye thrash/speed metal.

Just listen to the first two songs Forever Lost and I Am the Blade and you’ll see it’s not an exaggeration. The beginning of the former is pure Megadeth (old!!!) and the song gains the pure speed/thrash face (no crossover here) that goes with heaviness and gusto, and intricate structure that resounds like Rigor Mortis or Whiplash or even Kreator! The vocal is very aggressive and pure 80’s! The latter is more Germanic in approach just like an Assassin (old!) or Destruction, infernal as fuck!

Another excellent song is Lords of Rifftown that has the cohesive factor of not being a free jazz while at the same time having the creativity to sound different from the prior tunes, the song has an earworm chorus and marvelous solo, heavy as thrash can be.

Crystal Whip is another fast and furious classic of whipping metal! Frenetic and no-frills this song is a natural born classic. Over again the solos are over the top amidst the violent drum work that is second to none.

It’s not every day that one can hear an album like Feast Your Eyes. This really does happen one and million times. They use nothing new and yet they sound fresh. How come? Not of my concern, I just want to have a little more!

Feast Your Eyes is out TODAY on Svart Records. 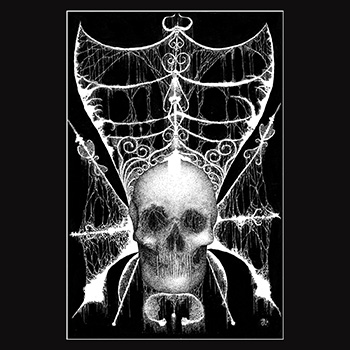 Blooming Carrions is a very underground entity from Finland with only a guy called EvM. The one-man-band released two demos and this is his debut EP with only three songs.

First of all, the music is a blackened death metal in the vein of Grave Upheaval, so if you’re not into this kind of ultra-aggressive sounds you’d better stop reading here.

Fist song is an epic of heaviness in noisy satanic death metal: being the title track the song has a lot of passages with changes of tempo and of course, phrases. Difficult to fathom what is happening because the wall of noise, it demands some spins to get what is really happening in the somehow confusing mix. Although the admirers of this kind of bestial metal doesn’t expect something like a “good mix”. It’s noise upon noise, metal on metal affair. Density is what guide the whole EP.

Enchantment of Slaughtering sounds like an Aussie band, with Impetuous Ritual being the disgraceful reference: no quarter for the posers, yet not so different in MO from the first track, this song is a relentless attack to the senses, only made for the most radical headbangers out there. Although the tune has a kind of “guide” riffs, everything sounds chaotic and apocalyptic. The quintessence of the end of the world.

The long track Lehto just adds gasoline to the satanic fire and the explosion is imminent. Like the first one, the song is an epic operetta of infernal proportions. Over again, the changes of tempo, like a trip to hell itself, with vortexes of guitars, insatiable drumming, mega guttural vocals, all lead to the ultimate destruction of mankind.

This album has one mistake however: it’s too short and I’d like to hear a proper debut with all the nuclear destruction put together. It’d be an interesting experience.

Sisters in Blooming Flesh will be out in 12″MLP/MCD on Iron Bonehead and the date of release is November 28th.

Sometimes labels can be confusing. This band from Portugal sometimes is labeled as Blackened Punk which I beg to differ. The thing is if they have some Discharge influence (as in old- Sepultura or HELLHAMMER, I can totally agree with that). So that it is, a Hellhammer-like kvlt of extreme black metal.

That being said this EP clocks in at only 19 minutes with 5 nasty black metal songs.

First song The Old Serpent indeed commence with a Hellhammer kind of riffage notwithstanding with a second wave of Black metal (in vocals mainly) appearing in the forefront of this simple but very rough song that got anyone by the balls.

Regressive Crucifixion resounds like a heavier blackened thrash band that ran amuck into the savageness of pure black metal rage. Extremely headbanging song, no quarter and no frills. Only for the strong in mind and soul. This is the one which most resounds like Apocalyptic Raids EP if it was recorded today. Fucking classic.

Great Advocator of Blood puts more pedal to the metal, with an unapologetic drumming, vocals from the abyss and elementary but effective guitars. A vision of hell itself.

Under the Influence of Lucifer brings more thrash-turned-black work with a mix of Nifelheim with Marduk. True to the bone, obdurate and perfect for invoking the horned one itself.

To pack the rusty metallic attack, The Sinister Bride is a party for die-hards of the old school culto. Scourging sound with terror and pestilence through bellows of infernal type, satanic velocity, everything runs amok and that’s the end of the massacre.

Before all Submission In Absolute is an excellent and pure-blood black metal work. And it deserves to be heard as such. Fuck the sub-labels, stay true!

Submission In Absolute is out NOW o War Arts Productions.