Judging by the current moment of music in general in this end of 2019 one can easily say that a band like Avslut is just generic Black Metal. Why should you buy it? 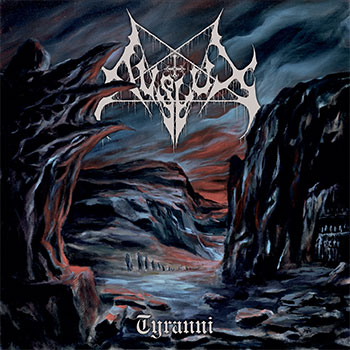 Taking a fast heed at Tyranni by the Swedish band Avslust one can say that it’s not the greatest creative opus in the history of the music. But listening close this album is pretty good.

Comprising of nine tracks of unrelenting Nordic Black Metal tradition clocking in at 47 minutes, Tyranni offers quality music akin to their Swedish countrymen Dark Funeral, Setherial, Lord Belial and even some Marduk. They get the obvious and make something good out of it, like focusing in the composition inside an already done structure.

The fast and furious opener called Likvidering leaves one in the dust due to a classy guitar sound whereas Allt förgås follows the same way of showing black metal dexterity.

While the title track is not something very remarkable in riffage, the melodic fourth track called Stigens ände appeals to a melodic take and mid-tempo drumming. This is very similar to Dark Funeral by the way.

But the best tracks of the album are Den eviga flamman and Underjordens apostlar successively. The first opens with a fast, killer, strong riff while the latter is not so different, but it is faster and stronger. Both tracks are earworms. Fucking good.

There are still 3 tracks left but I’d choose Dråp because it sums up the idea of the album.

Okay, over again, it’s not the most original album but for those seeking traditional Swedish madness, it’s something very good indeed. Sometimes black metal clichés are still good black metal.