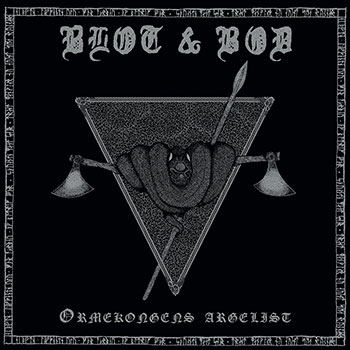 Blot & Blod returns with their sophomore album of pure brutality inside the Korpsånd circle of DKBM.

Brutality and minimalism take control here with their Darkthronish approach of pure black metal dementia. Nothing is so conventional here, except that they take the raw black metal to the next level: although being simplistic, the songs are earworms and the production is not terrible. In another words, it’s not a bedroom project.

Some call their sound punk/black metal, which I do beg to differ. This is pure black metal, but it’s just different for what is has being made in countries like Sweden and Finland. Ormekongens argelist brings the Nordic cult to a level that is not pseudo-epic as some of their Black Metal peers across the globe. That’s what makes this album a very cool experience.

This is the kind of opus that black metal maniacs were waiting: forthright massacre, no-frills brutality and absolutely no melodic stuff.

Ormekongens Argelist is out now on LP/CD on Iron Bonehead.